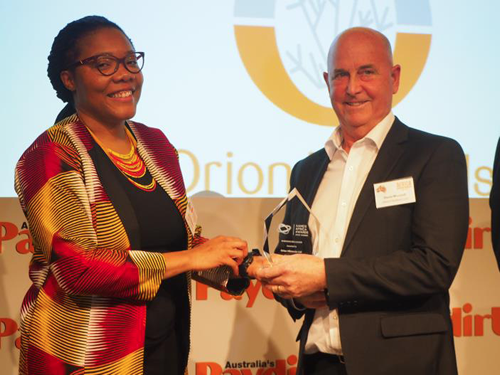 The Emerging ESG Leader Award recognises companies that have a visionary approach to ESG which delivers long-term benefits for communities.

Orion Minerals’ primary focus is on South Africa, where it holds a large tenement portfolio within the geologically rich Areachap Belt, located in the Northern Cape Province. Despite numerous mineral discoveries between 1970 and 1998, the Areachap Belt has seen no major exploration over the past 20 to 30 years.

Orion’s projects in the Areachap Belt include its flagship Prieska Copper-Zinc Project, which incorporates the historical Prieska Copper Mine, which operated between 1971 and 1991 and produced over 430,000t of copper and 1Mt of zinc.

The Prieska Project hosts a globally significant VMS Resource of 30Mt at 1.2% Cu and 3.7% Zn.

Orion completed an updated Bankable Feasibility Study (BFS) for the Prieska Project development in May 2020, based on a 12-year “Foundation Phase” 2.4Mtpa underground and open pit mining operation, delivering total payable metal production of 226kt of Copper and 680kt of Zinc in differentiated concentrates.

The BFS confirmed the potential of the Prieska Project to underpin a significant near-term, low-cost, copper and zinc development project, with exceptional opportunities for future growth. Based on BFS assumptions, the Prieska Project will provide excellent financial returns, for a relatively modest capital investment, given the scale of operations envisaged and the fact that the new production hub is located within a highly-endowed but under-explored volcanic massive sulphide (VMS) district, with significant long-term exploration potential.

Also, within the Areachap Belt, Orion has consolidated a ~1,800km2 land-holding that offers outstanding potential for the discovery of both Volcanogenic Massive Sulphide (VMS) mineralisation and intrusive contain copper-zinc and intrusive nickel-copper-cobalt-PGE (Platinum Group Elements) mineralisation.

While initial Resource drilling was successful in delineating ore with potential for an initial 12-year life of mine at Prieska, the ore body remains open along strike and in the up-folded limb. Further drilling to extend the LOM will be conducted from underground once appropriate access is established.

Near mine exploration programs have also resulted in the discovery of the new Ayoba prospect, located just 5.3km south-west of Prieska, plus numerous compelling targets for both VMS-style copper-zinc mineralisation and nickel-copper-sulphide mineralisation within a 15km to 80km radius of the mine.

Read more about our exploration programs in the Areachap region.

In Australia, Orion holds a sizeable tenement package in the Fraser Range Province in Western Australia, which is subject to a Joint Venture Agreement (JVA) with IGO Limited (ASX: IGO). The Fraser Range hosts the world-class Tropicana gold deposit, as well as the Nova-Bollinger nickel-copper deposit.

Importantly, Orion is free carried through to pre-feasibility study on any of the ground acquired under the JVA while retaining between 10% and 35% interest in the JVA.

The Company is also progressing exploration licence applications over prospective areas of Walhalla, where one of Victoria’s largest historical goldfields is located.  The tenement application areas are prospective for gold, copper-nickel and platinum group elements.

“Analyst or Research Report (Report) is available on the Orion Minerals Ltd (Orion) website https://orionminerals.com.au/investors/analyst-coverage/. Whilst Orion makes the Report and other reports on its website available for investor information, the views expressed in the reports are those of the Broker or Analyst and do not represent the views of Orion or its management. Orion and its personnel do not endorse, confirm or express a view as to the accuracy of the contents of the reports, or the views or any recommendations in the reports, and will not be liable for any losses arising from anyone relying on such reports. Please see the Orion disclaimer on the website for further important information.”
I AGREE DISAGREE